"What are we supposed to do with all these bananas?"

Cap, wearing a boyish grin on half his face and covered in mud, proudly held up his 3-foot prize.  He and Jeff had spent hours exploring caves in the park, which we were urged to visit as long as we were in Samana.  It wasn't a park in the regular sense and we'd need to take Ruff Life to get there.  From Wikipedia:


"Los Haitises National Park is located on the remote northeast coast of the Dominican Republic that was established in 1976. It consists of a limestone karst plateau with conical hills, sinkholes and caverns, and there is a large area of mangrove forest on the coast.

"Other parts of the park are clad in subtropical humid forest and the area has an annual precipitation of about 2,000 mm (79 in). The park contains a number of different habitats and consequently has a great diversity of mammals and birds, including some rare species endemic to the island. Some of the caverns contain pictograms and petroglyphs. The park has become a popular ecotourism destination but the number of tourists allowed to visit is limited." 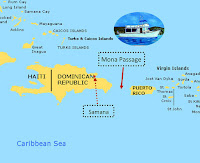 Along with others we were waiting to cross the Mona Passage to Puerto Rico.  The Mona was reportedly a cauldron where the Atlantic and Caribbean Seas smashed together, and everyone talked about it with gloom and doom. Anything to postpone that voyage had my vote.

According to broadcasts we still had several more days to wait for a good weather window, so along with Water Witch we decided to head for the park, which we'd heard was spectacular.  First we stopped in town to purchase our park permit; good for 48 hours and pretty cheap as I recall, 20 bucks or so.

"We're in the park, a nice 2 hour cruise across the bay, anchored in a real pretty spot, just our 2 boats. We went for a dinghy ride around the area, fun and beautiful. There's these mini-mountains with plants and birds - carved out by the water through the ages."  What did I know?

"Cap was determined to pick through some mangroves ala the African Queen, and we had to paddle in places.  Stopped at a cave which had tons of dead mini-conch shells - picked some up to make into Christmas junk. Then we found the entrance to a sort-of river which wound through mangroves, eventually ending at a construction site.

"Had dinner at WW, where we were hassled by some guy wanting 200 pesos for a tour.  Then this morning, after Cap forgot to put a cup in the espresso machine, Czar shit on the deck and rain soaked through the normal places, two other locals came by to get 200 pesos.  Cap tried telling them that (1) we didn't have it and (2) he didn't understand the rest of what they said.  I got pissed."

Cap was on the back deck, reasoning in Spanglish with the men in their yola that we already had our permit, which we produced; and that we didn't want a tour. One of them climbed on board, insisting we pay; Czar, of course, nowhere to be found. I stewed inside the cabin before going down into the bedroom to see what we had left in the kitty to get rid of them; then flying back up, adrenaline racing.

"Here...it's all we have...TAKE THE DAMNED MONEY!!" I raged as I emerged from the cabin, startling all three men (Cap not as much).  I threw our last 75 pesos into the stranger's hands, spun around and stormed back inside.

The guy didn't know what to think of the crazy Gringa; probably felt sorry for Cap, because he returned the money and left without another word. 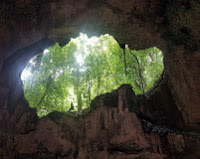 
"Pulled up anchor first thing and moved 'around the corner' so as not to get hassled.  Cap and Jeff got back late yesterday afternoon, muddy as hell, raving about the fun they had exploring caves.  Today Cap took me to his "Land of the Lost" up through a cave and into an open area with vines, trees and greenery all around.  We played mountain goats, climbing up some rocks to get there (I got scared going down - shades of Diamond Head)."

We were anchored in a perfect hurricane hole:  completely surrounded by cliffs taller than shown in this photo, with a single opening to get in or out. The whole place seemed prehistoric.  Only problem:  no breeze.


"Cap cooked up a batch of his soup, which we shared with WW. We gave Vickie some pecans to add to brownies for the crossing.

"We talked of putting Ruff Life up for sale once we hit Puerto Rico, but we'll see.  I surprised Cap by not leaping at the chance, because of the feeling I have of being 3 feet from gold and would wonder what might have been if we did make it to the Virgin Islands.  Well, no one's making us an offer we can't refuse yet."

While Cap and Jeff explored, Vickie and I got a chance to bond while she cut my hair. For the first time in ages I felt relaxed enough with another woman to really open up.  I shared my major aggravation, which seemed important to me at the time:  not receiving credit for being the real owner of Ruff Life and not just some bimbo Cap picked up; but mostly that Cap continued to deny my existence to his mother, and I couldn't stop dwelling, and harping, on that.  Vickie acknowledged and understood my grievances, and with her I didn't feel so crazy. 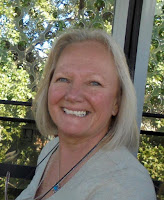 I became quite impressed and fond of this tiny Texan with a sweet voice which concealed nerves of steel. She'd taken a sailing course in Florida before setting out with Jeff, and was keen to learn everything she could about Water Witch.  She never intended to cruise long-term; and had very definite ideas of the career path she'd like to pursue once all this was finished.


"I'd like to work for West Marine, and maybe become a Manager one day."

Note:  I am happy to report Vickie achieved her goals and more; and we've remained good friends to this day, visiting whenever in the same zip code.


"Left the park at 9am - water was calm at first, then we were cruising right towards bad weather, which made for a progressively rough ride.  But it was only for a couple hours, and it wasn't so bad." 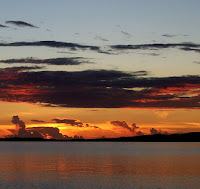 We'd run out of cigarettes and couldn't take the withdrawals, so we headed back to Samana alone, since Vickie and Jeff had no such dilemma.  I'd put on my cassette of Mussorgsky's Night on Bald Mountain which came through the speakers up top, where we were driving.  Perfect music for the trip, as Ruff Life bounced up and down against the waves, but we just laughed.  Even Czar remained on his perch in the front, where we could keep an eye on him.  It was actually the best spot on the boat which kept him from sliding.


"But before leaving the park, Cap and Jeff went into the jungle and brought back this huge bunch of bananas.  We can feed the anchorage. "

Up next: the Mona Passage

Don't miss a chapter! Sign up to be notified of the latest addition on the home page, no obligation, no sharing, no fooling. (Check your SPAM folder for confirmation). Thank you!