Ahhh, George Town.  After days of isolated, puddle-jump stops we were back in the midst of dozens of boats, with more arriving each day.  George Town was a popular destination because of its protected anchorages; and cruisers would while away the winter months up until the annual regatta in April; after which most skedaddled north or south to wait out hurricane season beginning June 1st.

We stubbornly refused to follow Tomboy into their suggested Hurricane Hole #2, electing instead to anchor, along with Glen Lyon, in an area just off the main canal; nice and breezy but with little protection, we learned that rocky night.  G.L. remained but we sheepishly moved Ruff Life alongside our friends the next morning, meaning put things away and tie everything down, again.

"After listening to the net, Tom radio'd and chop-chop - time to move!  NOW!  I keep having to pinch myself because we don’t have to leave for…it started as 2-3 weeks, now a month, or more?  Cap assures me I will have fun; like George Town; relax.  We’re planning on doing a lot of work on the boat, and Cap started by buying Tom’s spare battery for $10.  He switched ours all around, built a battery box and reconnected wires with the help of Tom and Dave, the electronics wizard from Sea Dancer.  Czar shares a beach with Jake, the Norwich Terrier on Welsh Rover."

After days without any signs of civilization we were suffering from cabin-fever, and perked up at the idea of exploring town.


"There's a nice market which has pretty much all you need. Meat's expensive, especially beef; but you can send and receive faxes and mail, which is really nice.  There's a couple of dive shops, a marine store of sorts, gift and various other shops.  The best bakery operates out of a van, and an old school bus houses the local hot dog stand.  It's a short walk around the little bay, with a church, ice cream parlor of sorts (strawberry and vanilla), and Cap found a sports bar with a pool table."

The 'net' in G.T. included advertisements for these establishments, and we particularly enjoyed the sing-song one for the cleaners, which promised,

We discovered as we traveled that when you drop off your laundry with one local woman, usually working out of her home, don't be surprised to find your clothes drying on chain-link fences up and down the block because it's farmed out.   Despite the cost we never minded, after my sudsy fiasco on board while trying to wash clothes by hand.


"Started rowing Czar back and forth to the beach - it's slow going and he practically falls asleep along the way, but hey, at least he gets there."

My body was getting into the best shape of its life.  I still refused to learn to use the dinghy motor, so I had no one to blame but myself.

"Last night there was a pot luck and bonfire with Christmas caroling on Volleyball Beach, organized by the couple on Rapture.  I was miserable.  Everyone seems to be a natural at this outdoor living except me.  I'll ask Cap to take me snorkeling later - maybe I need to get off this boat more often, and the only other place to go (for the most part) is in the water.  Merry Christmas."

I can recall sitting on the back deck, drinking coffee and penning those thoughts while Cap slept in.  I was kicking myself for ruining what should have been a joyous occasion the night before by picking a fight, and torturing myself with the same questions Cap was asking:  What's wrong with me?  Why can't I relax?

I watched Pam next-boat, wearing a red hat with pom-pom, steadying their inflatable while Tom handed down an over-sized pillow case full of gifts.  She took off for deliveries around the anchorage, confidently standing as she drove away.  "Look, Czar, there goes Santa!"
I couldn't help feeling jealous as I watched, wondering if I'd ever have such confidence.  To add to my distress, our friends prepared a scrumptious Christmas feast for 6: turkey with all the trimmings; on a trawler not much larger than ours.

I felt out of place among this boating community and its organized activities.  Most people were retired and/or with means.  Their boats were properly equipped and well maintained.  The place seemed full of cliques of boaters who returned year after year; and as yet I hadn't met another woman I felt comfortable sharing my deepest thoughts without fear of revealing the wrong skeletons.
There was no handy phone to pick up and call someone; there was only the two, three of us, 24/7. Perhaps in George Town I'd find a friend, for Cap was a turning out to be a tough nut to crack, as Mom would say, when it came to connecting emotionally.

In the meantime I picked up a brush, methodically painting my panel like Penelope and her tapestry, willing myself into a happy, carefree person. During our first week most people thought Cap was a single-hander since I rarely stuck my head out the back door. One friend of Tomboy's expressed an interest and would stop by each morning for a few minutes to check on my progress.  I felt comfortable chit-chatting with Skip about non-aquatic topics and looked forward to his visits.  I didn't feel like such a dolt.  Continuing the journal,

"Cap joked about introducing me around. This is Andrea.  She's ill.   He said we might just say, "F___ this shit," after a year, but I said I was pretty well shot already, so how much worse could I get?"

Cap, my polar opposite, jumped into this new world with both flippered feet, rewarding himself by snorkeling or free diving after working on some repair, which seemed a daily thing.  I accompanied him from time to time, but usually spent non-painting hours reading the nautical books in our cruising library.

It was no use; I'd never get the hang of this.  I couldn't even come up with a decent appetizer to bring to Happy Hours, and was thrilled to learn you can microwave stale pretzels back to life.  I was saved from then on, until Cap took over and created his ever-popular Bean Dip:

I've never been a refried beans person, but this dip was really good.  Cap lied about the ingredients to anyone concerned about processed foods, and I went along with the deception because otherwise we'd have to come up with another appetizer.

(Photo notes:  I painted on whatever I could find, like the mirror frame and an old Nestles Quik canister, which I turned into a treat container for Czar.) 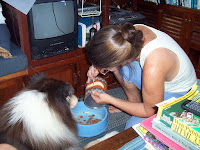 I've been asked what we ate during our cruise, but since I didn't write it down I can't hardly remember.  I know we packed rice, green beans and tuna fish, but other than that it’s a blank.  Cap became the Cook and I was happy to be Swabbie throughout our time on Ruff Life, but I do recall he favored one-pot meals containing starch and ground meat or chicken, adding this or that condiment to make it tasty.  We passed on goat meat and most of the other unidentifiable meats behind the counters in tiny markets with flies making themselves at home.  Few stores were air conditioned.  I'd turn away in disgust while Cap made his selection, so I can't tell you what-all we ate, but he always made it taste good. 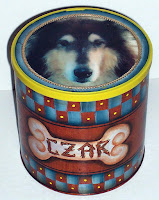 He got pretty creative with Czar's food, too. Wherever we shopped, Cap would carefully examine the ingredients of kibble, and then add some protein or whatever he thought Czar needed.  If nothing was available he'd cook up some chicken and rice.  Czar was a dainty eater and did not scarf up food like most dogs.

You'd think we'd eat fish, but the only thing we caught was a 4-foot barracuda while cruising with a line out from a pole attached to the transom.  I was never really a fish person other than shellfish, and relished the idea of surviving on a diet of fresh lobsters. Cap however, avoided crustaceans but for an occasional shrimp, ever since a friend from childhood reverted to the mind of a 4th grader after consuming a bad oyster or something.  He did look for lobsters for me but they weren't as prevalent as you'd think; at least those of legal size (tails 4" minimum, I'm going by memory).

Between volleyball and pool, Cap met everyone; and we became friendly with another unmarried couple closer to our age, also cruising with no particular destination in mind, which surprised most people for some reason.  One day Cap went spear-fishing with Frank while Licole and I went snorkeling on the reefs.  I was, of course, terrified, but like Pam, Licole was confident handling the dinghy alone and anchoring it while we swam.  It was good to see so many women doing things I would have attributed to men, and I was gaining confidence just watching them tie off this and swing around that. 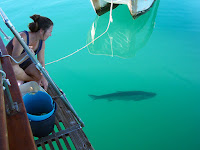 The 'boys' were enjoying their dive until Cap saw an 11-foot shark heading for Frank, who'd speared something and was trying to get it under control.

"BLBLBLBLBLLBLBLB!!!"  Cap was burbling and waving his own spear to get Frank's attention and the shark veered away.  It took half the time for the two of them to get back into their dinghy.

God, what a story, I'm thinking.  And he expects me to relax while snorkeling?  At least I didn't ask Licole to hold my hand while we explored, though I was tempted.  Progress.

Up next:  Winter in Paradise

Author's note:  my early efforts at painting, described throughout these posts, have led to my current endeavor, which is to paint a series of faux-windows to decorate a local tiny-home community for the chronically homeless. Read about the Resident Artist.


I'm just as slow now as I was painting that panel in George Town, but I eventually finish.  This has been the reason for my delay in publishing chapters, for which I apologize.  I'm close to the finish line on the painting project, so future chapters will be more forthcoming.   Thanks for your patience and interest!