"We had to get a new horn after the bracket broke while Cap was removing an old bee's nest; and while working on that he accidentally broke off the antenna right above it, but said it was pretty well shot already.  It must not have been important because he replaced it with the dolphin sculpture he brought along; our new masthead."

Each day we were discovering that all was not what was claimed on King Tut's Survey.  The two 150-gallon fresh water tanks  were only 75 apiece but Cap said we'd be fine; plenty of drinking water with that extra 40 gallon tank, which primarily fed the ice maker.  Continuing my journal, "Had to get a new water pump for the bottled water tank.  The Survey said it held 40 gallons, so Cap got the Culligan Man to deliver eight 5 gallon containers to the dock.  Much to his disappointment it only holds 15 gallons, so we have 5 jugs on the back deck.  The ice maker can only crank out so many ice cubes, but we'll use the water, someday."

The ice maker was one of the main selling points for Cap, who was addicted to copious amounts of Iced Mochas.  Even then, Oregon was full of roadside baristas, and Cap was used to picking up his morning fix on the way to work.  In Florida he perfected his home brew, prepared in a Bubba Mug:  a cup of espresso mixed with Ghiradelli ground chocolate (later Nestle's Quick); fill with ice; add milk.  His dilemma was how to find milk on the high seas.

"Why not use the boxed kind?  I saw that in Europe."


Cap never heard of Parmalat, and once found a case of 12 came aboard.  I drink any kind of instant coffee with powdered creamer, no sugar.  The espresso maker was a gift from a former boss but rarely used until the boat. It fit nicely on the counter top, next to the free Gevalia canister and my favorite flour and sugar tins. The wooden bread box, originally my parent's, would surely come in handy for storage.

Why did we sell our VCR players and tapes when there was a small TV on board?  We didn't anticipate watching television, not with such an extraordinary lifestyle, otherwise why bother?

"Chester sold us a bunch of ropes, lines - says we can never have enough.  There's a correct way to tie the boat to save using those bumper things; a sure sign, he says, of amateurs.  We've got 3 more weeks with Chester and can't say enough how fortunate we are that he's taken us under his wing.  We would have been lost. "We have this old wood pole with brass hook, used for pushing, pulling, grabbing ropes, etc. Yesterday we used it and the pole came right out of the hook.  Sometimes I feel like "I Love Lucy," but it's fun. I'm beginning to think this won't be a money-pit...just a lot to get us prepared.

"Not a bad life.  It's very easy to forget what's going on in the rest of the world.  Certainly been getting my exercise going back and forth to the car, and walking Czar.  Cap wanted a slip that would be easy to drive in so we're at the very end of the dock.  At least we hit pilings instead of boats while we practice pulling in and out." "I washed the boat for the first time, tripping over cords, mops and buckets while trying to hose everything off.  I was happy with the way things looked."

And proud after Chester complimented my organization, adding,  "You don't want to look like liveaboards."
I thought that's what we were, but remained silent.  Finally, the place was looking more like home, when...

"Czar's taken to munching on the wood - first the bottom stair, then railings, hand-holds - have to keep an eye on him. Muzzle's not a nice thought, but I hate trying to keep this place halfway decent, then he goes around tearing it up, making it look like shit.  I hope I take to this, considering all we've gone through to get to this point." My irritation with Czar was transferred to Cap when he was impatient to get started on the bedroom's cabinetry.  I thought we should wait until we finished provisioning so we'd have a better idea of what we needed, dimension-wise; and he finally agreed to wait until we were underway. In the meantime we hung a net at the head of the bed for spare towels and sheets.

Sis was right:  everything including the word marine was expensive. Reading Good Boatkeeping was both a blessing and a curse, for I became acutely aware that we lacked most of the basic requirements to tackle a cruise such as we were planning.  We couldn't possibly buy it all, so we'd have to prioritize.

King Tut's equipment included an Echo Sounder, Chart Link, 4 station hailer, VHF radio, depth sounder and distance panels, Sat Nav and Auto Pilot. As Cap fiddled with dials and buttons, he discovered this or that didn't work or was simply outdated.  We didn't really need all that anyway, since we'd mostly be island-hopping and only during good weather.  Our VHF radio worked so we didn't need an expensive Single Sideband; and we picked up a hand-held Garmin GPS for navigation.

We registered the boat in Oregon and it was good for 2 years, so we decided against spending $100 to have King Tut documented with the Coast Guard; which would help us if anything happened in international waters, but that's why we had Czar and the guns.

"What do you mean we need a second boat?  For what?"

"If we have to abandon ship; and for when we're at anchor and have to resupply.  We won't always be tied to a dock, you know."


No, I hadn't considered either of those points, and he never mentioned them in Oregon.  Alright, then, how about those cute little red Zodiac inflatables?  No, Cap was determined to find a hard-sided Livingston, made in the Northwest.  It has a double-hull for better stability, important for transporting Czar.  Cap eventually found a dealer and we became the proud owners of a 10-footer, but we still needed a motor to run it and davits to carry it.

Davits are crane-like extensions used to carry and lower tenders, or dinghies. Stainless steel davits are outrageously expensive, so Chester told us about someone who could make aluminum davits to spec.  Cap designed them to attach to the back of the transom, and bought a small 8hp motor from another boater, which he said worked good but needed a new prop.

Testing his new motor, Cap threw Czar in and tooled around a bit until he started sinking, so quickly turned around.  He'd installed the drain plugs incorrectly, the Dockmaster explained.  During one high tide the dinghy kept smashing under an adjoining dock so we pulled it out of the water, taking a chunk out of Cap's finger in the process.  Nothing was easy, it seemed.

We were going through money at an alarming rate: anchors and chain, fishing tackle, 2 scuba tanks and dive gear for Cap, life preserver for Czar, a tiny sewing machine to make new covers and curtains, waterproof document case; our list was endless and we still needed practicalities like spare parts and charts. I expected charts to be priced like road maps but they were exorbitant.  In hindsight I suspect Chester only recommended charts covering Florida because he never expected us to make it past the Keys.  We figured we'd pick up whatever we needed along the way, like at gas stations.


"God, I love mornings, being outside, having coffee, peaceful rolling of the boat."  I'm an early riser and my favorite times were before anyone or anything stirred.  I'd plan my day and contemplate my surroundings, but too much thinking can be detrimental.

"The boat.  I think it's starting to sink in that this isn't just an extended vacation - this is where I live."

But things weren't shaping up quite the way I'd anticipated and I began to cry for the fleshpots of Egypt; and wondered why I resembled the women in splashy yacht ads not at all. 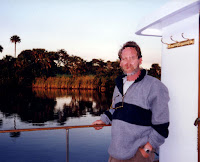 "Lately I keep thinking of what's gone - last night I was in the 'head' and thought of regular bathrooms, with room for decent towels.  Big place, surrounded by things now just a memory.  But, I don't have to go to a job I hate and be stressed out 8 hrs a day.  I'm still stressed, but I do it to myself.  Need to make a list of things to be done.  Cap's one of those lucky people who take things as they come.  Wish I could do that.

"Sometimes I feel one step removed from street people; comfortable bums is the term I'd have to use at this point.  I don't want to think maybe once we're underway because that's just living in the future and not the present."

I suspect my personality was splitting at this time because I was flip-flopping in my moods; simultaneously griping and loving the lifestyle, or at least what I expected to become our lifestyle.  I enjoyed meeting people with their own stories of abandoning conventional lives to become liveaboards.  We weren't crazy...other people do this, too.  In that respect I relaxed more; but those who ventured outside the marina loved to top one another with sea-going tales of terror, and the more I heard the more I wanted to stay put. 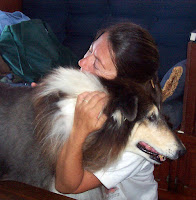 A tornado touched down north of us in Clearwater while Cap was out shopping. Suddenly the rain and wind lashed out and I screamed for Czar, who came sliding down from the front.  The hatch and portholes were all leaking, so I placed garbage bags over the front hatch, weighing them down with spare ropes.  Scared, frustrated, out of dry towels and close to cracking, I shut off all power and huddled inside with Czar until Cap came home.

Cap, ever calm, pointed to our neighbor on his new 50' trawler, Toys We Got, frantically placing garbage bags over his front hatch, swearing about his f'ing boat.

We'd gone through half our Cruising Kitty and we were still in Florida.  After a month Cap declared, “If we’re gonna go let's go,” so we made plans to leave Palmetto and head for West Palm Beach, our jumping-off point to the Bahamas.

Coming soon:  No Name Trawler and the ICW

Don't miss a thing!  Sign up to be notified of new chapters, no obligation, no sharing.  (Check your Spam folder for confirmation.)  Thank you!