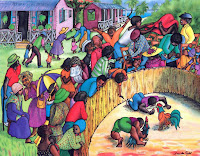 Here's a diversion from life at sea: a drive around the Dominican Republic.

"We made arrangements with Pedro to rent 2 motorcycles, and at 8am on Sunday, Dave, Cap and I set off to explore the countryside."

Dave's Allegra was already safely in Luperon when we arrived, and we were all eager to explore the island as soon as we found our land-legs again.  My own experience with motorcycles had been brief:

Ex-man #1 owned one while we lived on White Sands Missile Range, NM in the late 70's; and I felt comfortable hanging on while he drove, sort of.  I did once jump on a Harley 200cc at a party while drunk, and after the owner unwisely demonstrated the controls off I drove: past barking dogs and through hanging laundry in the backyards of the post housing area.  Somehow I made it back to the party, hollering, "HELP" as I passed because he forgot to show me how to stop; but fortunately someone managed to catch up and jump on the back to prevent injury to my young, dumb ass. 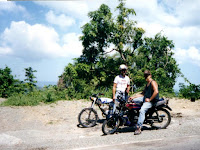 Cap was the experienced cyclist, having owned one or two, and I didn't hesitate about getting on the back.  Dave thought he might have been on a bike once but was willing to give it a try. Pedro showed the controls of a small bike to Dave, whose first move was to drive himself into the side of the building; but after everyone laughed (except Pedro), off we went; Dave with a helmet but not Cap or me.  We didn't have any particular destination in mind...just land. 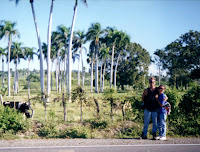 "It was gorgeous. The vegetation is not to be believed.  Grass, palm trees, as Cap said, "We thought Eugene was green!"  We saw different types of houses from hovels to mansions; abject poverty and wealth - doesn't seem to be any in-between.  As we headed for the interior we stopped first at Imbert - much larger than Luperon. 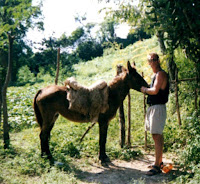 "People drive like nuts, but no big problem. Cars blasting announcements; people hauling goods and themselves on burros, with hand-made saddles that look like straw; brightly painted homes; dogs and children wandering around.  People not as friendly as in the Bahamas, but maybe that's because we were inland and they're not used to strangers riding through town on motorcycles. 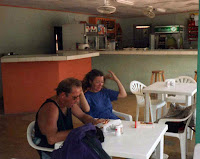 "We stopped for lunch at a place along the road.  Cap ordered 'ribs' and Dave and I ordered god-knows what (it looked like chile verde through the glass).  It was vile - cooked fat, that was it.  Cap's had more meat (pork) but it was basically the same thing, only rotisserie style.  Made me sick to my stomach, and not in the best of moods."

I get cranky when I need to be fed, and at the time I was unfamiliar with Chicharrones: pork belly or port rinds, usually fried, but this was slimy like okra gets, in a sauce. I was a picky eater as a kid and leery of strange foods as an adult but one thing remained constant:  no guts, so I'd never have ordered this if I knew what it was.

"We continued on through Navarette, which was like Imbert.  Cap said if he was single (which he is, but I guess he meant alone) he could stay here.  Not me.  Dave got some ice cream and then we stopped at what Cap hoped was an artist co-op but wasn't; but Dave and I did get a chicken leg and something deep fried (seemed like eggplant, but Dave asked and it sounded like plantain).  Delicious. 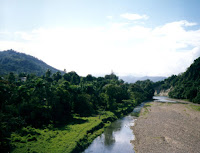 "We started to head back to the coast, and in a bit the road took a steep, windy decline.  We stopped to let the brakes cool, then slowly went down.  It was gorgeous.  Dave kept up all day, but we did turn around periodically to check on him.

"So, down the hill we stopped for a beer in Los Hidalgos, spoke with the locals, then...Cap spotted a cock fight arena down the road, so we stopped there.  It was interesting - not as bloody as I expected.  Watched 3 fights."

I'd seen bullfights in Barcelona, Spain, talk about bloody; but I was more curious about the events surrounding the spectacle than the fight itself.  We didn't know what to expect when we parked outside this odd, blue wooden structure, but were encouraged to enter, no charge.  The place was packed.  We bought some Presidentes and sat down on the bleacher seats, watching the activity while we waited.  Off to the side, outside, was the butcher but I tried not to look.

"Dave got his shoes shined (laces and all) and the locals didn't seem to mind us being there.  They taped the birds feet with what looked like amber talons, quite a production, and obviously an art.  Cap put a bird to sleep as we left--they probably thought he was a magician (or darker)."

This fellow was proud of his cock and enjoyed having his photo taken.  So everyone's smiling when Cap holds out his arms towards the bird, which the man hands over.

Cap learned a trick from his grandmother about killing chickens a humane way:  lay the chicken on its back and hold it with one hand; then place one finger on the surface above its head and 'draw' a squiggly line away from the chicken.  It becomes hypnotized as it's fixated on the the finger and remains frozen; neck outstretched (ostensibly for the ax); feet in the air, even after Cap removes both hands. Damnedest thing. I'd seen him do that with baby chicks so knew what to expect, but watching him hypnotize a full-sized cock was something to behold, and gave the owner a look of alarm.  What happened to his prize cock?  After a couple moments Cap laughed and clapped his hands, and the cock flew back to life, ready to go.

"The rest of the ride back was nuts - dirt roads which stopped at 2 rivers, so we had to plunge on through the water.  No other way and it was fun."

"Drive straight through and don't stop, whatever you do," Cap yelled to Dave on the opposite bank but of course he stopped halfway, his engine died, and he had to walk it the rest of the way across.  Dave never griped, and his cheerful attitude was nice to be around. 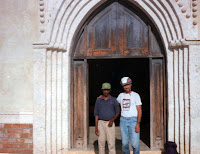 "We were tired, but stopped at a church which was built with some original stones from Columbus' time.  Stopped at a Silvio Tineo, which I thought was a silversmith. No, cheese."

As we walked through the sidewalk arch with skepticism we discovered we'd walked into someone's private yard.  A man spotted us and Dave tried out his Spanish, which was enough for the man to invite us to sit and sample some cheese.  We were soon joined by the rest of the household at an outdoor picnic table covered by a trellis in bloom.  It was really a lovely spot.  They offered us something to drink and considering we couldn't really understand one another, we had a great time.  We bought some cheese.

"The ride the rest of the way was windy, with a spectacular view of the ocean.  Back to Luperon by 5:30 pm.  I'm sure Pedro and his cronies had their doubts as to our survival (especially Dave's), after our noteworthy departure.  All in all a nice day, and as Cap said, the best $20 we've spent so far!"

Up next:   Eddie and the Cruisers