"Whatever you do, DON'T PUT HER IN GEAR!"

Cap put the knife between his teeth and went back under the boat.  It was just like Sea Hunt.  Czar balanced on the bow as I waited on the aft deck while Ruff Life, idling listlessly, bounced against the chop, in sight of land and slowly moving closer with the tide.

What if he doesn't come back up?  There wasn't anyone close enough to help if something went wrong.  Cap would drown before Mike could catch up, not that he'd be able to help.  I began to pray.

It had been a beautiful day for a sail, and the sticks which left with us that morning had long since tacked their way out of sight; except for Mike, whose enormous mast was easy to spot in the distance.  The sea was rough for the first hour, but then calmed with a slight wind.  I sat up top along with Cap while we played our favorite traveling game:

"I went to the store and bought: an Anchor; Buoys; Cable ties, Dive gear..."

"Oh, shit!"  Cap put the gear in neutral but too late to avoid the fishing buoys passing on either side.  He scrambled down, stripped off his clothes and dove over the side, emerging a moment later. 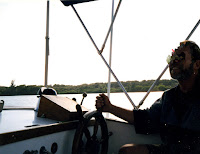 "The propeller's all tangled up in fishing line.  Get me a knife," so I grabbed my 6" Wusthof Chef's.

Cap popped up and down to catch a breath, but when he didn't come back I held my breath.  Finally he surfaced, successful in his task, and I was reminded not only how much he meant to me, but how important it is to have good quality knives.

"He had me throw a rope over for him to grab, but we decided if it happened again we'd tie a rope around him.  That dangling line would have done no good if he drifted away or got a knock on the noggin!"

"I was petrified I'd do something wrong and chop him to pieces, and when I asked why he didn't turn off the motor, he said he was afraid it wouldn't start again."

"After putting the mast back together, including the lights, we look like a trawler again.  Rented a room in the motel next to the Two Turtles along with 8 others to watch last night's Super Bowl.  The game was good: Denver 24, Green Bay 17.  The electricity kept going off but we saw most of it.  Tomorrow we get gas and move to Red Shanks." 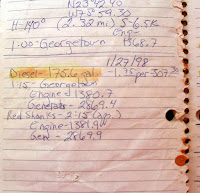 Easier said than done. Cap doused himself and the boat with diesel while filling up at the dock, and as we pulled away we saw Czar, sitting patiently on the dock. He refused to swim of course, so we had to circle back to pick him up.  Eventually we moved to Red Shanks anchorage, farther south of George Town's harbor than the others but easier to head out.  Because of the distance from town it was less crowded, and we kicked ourselves for not checking it out sooner. The owner of the Chicago Blackhawks, on his enormous power yacht, was nice enough to share his TV reception signal with everyone in the anchorage, I've no idea how.

"We parked near Lady Margaret, a trawler from Canada, and went for cocktails last night. Colin's a carpenter and their boat was lovely.  Cap, inspired, tore apart one of the settees for the ice maker.  I cut down the cushions and it's looking good.  Cap was so excited because he found a 'secret drawer' behind the ice maker containing 4 extra wooden doors."

Cap always intended to build a cabinet and include space for the charts we inherited, but it became our media center instead. 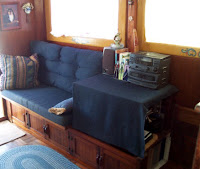 As luck would have it, we'd heard negative things about cruising with Mike:  that he couldn't handle Dragonfly and could become a liability. After reading cruising-guru Bruce Van Sant's, A Gentleman's Guide to Passages South, a book most of us owned, Mike purchased an identical clipper ketch to Van Sant's Jalan Jalan.  The trouble was it was too large a boat for an inexperienced single-hander, but who were we to ridicule?

Tom in particular was concerned for our well-being, since he and Pam frequented George Town annually but never ventured further south.  He kept a vigil near his radio for weather forecasts from Herb, broadcasting from Canada, and the best weather-window suggested for trawlers. We didn't own a single-sideband (SSB) radio, but Mike did.

Tall, heavy-set with white whiskers and retired, Mike was on the lookout for a female companion to join him along his cruise. The Vegetable Lady was sweet on him but she was too old, he said.   We assumed he'd be sailing and therefore wouldn't see him too often, but soon discovered he intended to motor most of the way, behind us.
January 31


"We were supposed to leave on Saturday, then suddenly it became yesterday, because of the weather.  We were like a Chinese fire drill -- returned the quilt book to Fran on Aire Lock, said goodbye to Tom and Pam, Jolly Roger and Smokin, turned around just short of town for my shoes left on Tomboy, back to town for Cap to meet his 'buddy', and one last provisioning trip.

"Our bank card was refused.  We called the bank and found out they'd changed hands and our card was no longer good, but they had mailed another."

WHERE? Florida, Oregon or 'Jersey; and how to get it in the middle of the ocean?


"I freaked, used my VISA for a cash advance and sent Hill a check from Wells Fargo for $1000 to cover us.  Anyway, off we went - leaving George Town behind.  Mike followed some sailboats out a different cut and couldn't find us but caught up.  The sea was calm when we left at 11 am, but close to Calabash we were rockin'-n-rollin'!!  The first anchorage was terrible - no protection, and the second not much better.  Just short of  the anchorage Czar decided to 'dump' on the foredeck, on the  ropes, around the anchors, lots of fun (useless mutt!)"

"What are you doing?!" Cap yelled down from the fly-bridge.  I'd grabbed a bucket with a rope attached to the handle, and was lowering it to fill with seawater a second time to rinse off the deck. "STOP IT!"

"Why?" always questioning, but obeying.

"It'll act like a scoop.  You're lucky the rope didn't slice your hands."

I thought of the dinghy flipping over in Florida, filling like a scoop and shearing off the davit.  Why didn't I think of things like that? 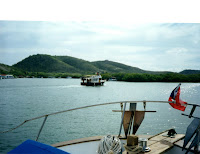 "We rocked all night, even with 3 anchors. We called Gyra in Conception for the weather because we didn't trust Mike, and decided to head for Clarence Town today.  It was an 8 hour trip and the 1st hour was rough, but then, as predicted, the water calmed and we were having a good trip."

Until the fishing buoys.  Shortly after all that, the left anchor fell out of its bracket on the bow and went over before I could stop it, but Cap was watching and put us in neutral in time.

Finally, we anchored in Clarence Town.  Cruising didn't seem to be getting any easier.

Up next:  Southern Bahamas