"Wake up, Cap!  There's a helicopter outside."

"Huh? Wha? What are you talking about?!"

"I stepped out the back door and there's a helicopter just sitting there, staring at us.  Get up!"  I scrambled to put away the pipe, and made sure my long dresses covered the rifle stashed behind the bedroom door.

Photo note: This was not the real thing; but it's precisely how it appeared from the aft deck. 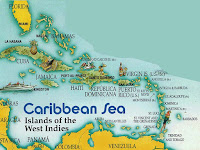 "We stayed on Mayaguana for a few days, waiting for weather.  No public phone, no groceries to speak of - everyone has to wait for the mail boat to arrive with provisions from Nassau, and the (weekly) boat hadn't come for 3 weeks.

"Left there and now in the Turks and Caicos - British islands I'd never heard of, just past the Bahamas and NW of the Dominican Republic, our next destination.  We're on the main island (Provinciales) and it must be a resort, or wealthy getaway because this harbor is surrounded by outrageous homes.  The water just gets nicer and nicer, and my fears are subsiding, a little at a time."

I kept journaling how gorgeous the water was, but photographs truly do not do it justice.  It's like witnessing anything close-up: an endangered species; a historical monument. I had a tough time grasping that the different shades of water indicated either coral, sand or deep enough.  Fortunately Ruff Life only had a 3-foot draft but still we needed to be careful.  Cap kept forcing me to practice driving the boat in case I ever HAD TO so I'd give it a shot; but handed controls back as soon as I could. I was terrified of running aground. 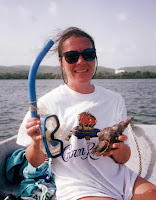 "I snorkel more and feel more comfortable, but still like having Cap close.  I won't let him go diving because of his face.  It's much better - the muscles are coming back slowly but surely. The only thing I have a problem with is if I'm sitting on his right side (the paralyzed side), I can't tell his reactions to what I say.  I have to grab his chin and turn his face so I can see the smile on his left side.

"Spent five or six weeks in George Town.  I wasn't sure if I could go on, so the time was necessary for my psyche.  As I've said, this is no picnic and takes a lot of adjusting to, but I'm more ready now than before.  You know how it is - you have preconceptions and then reality hits - ouch!

"We need to get to the Virgin Islands and get back to work.  We've been told several times that if you can't find a job there you're not looking.  Plenty of work, so they say.

"We've run into a lot of nice people and seen quite a bit.  It's interesting to see all the different boats - everyone heading someplace different with different stories, but we have this in common: everyone says that people back home think they're crazy.  I'm pleasantly surprised we've gotten this far, now that I see what's involved. So, Mom, until the next update, all my love."

My Mother couldn't have any concept of our experience, it being so foreign to her life in suburbia.  Cap and I would call our mothers whenever we stumbled upon a public phone, and I'd fill mine in with detailed letters, which she kept and I'm now quoting.  Mom 'kept good thoughts' and didn't worry, for her firm belief was that we were in God's hands.  I could only hope.

"New book, new countries, new adventures.  On the 14th we left Abrahams Bay to stage at SE Point.  A few hours cruise; we set anchor and took a nap, preparing to leave at midnight for "Provo" (Provinciales, Grand Caicos).  The trip was calm - the best I remember, and we made great time.  Had to slow down close to Caicos because we beat the dawn.  Czar's place is now the short bench while traveling.  He seems to be OK, but at the first start of the engine now he hops up.  Wimp. 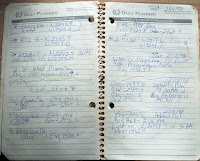 "Met Dave on Allegra, also waiting for the dawn.  Cap picked through the coral like a pro, and then found an abandoned mooring in Sapodilla Bay.  Gorgeous.  Cap hitched into town to get some cigarettes.  We're really bad.  It was Sunday so we couldn't clear customs.

"I learned to drive the dinghy, to Cap's relief.  Rode to the beach, Cap hiked to Government House for customs, I took Czar back to the boat, but have to work on tying up.  I stopped the motor at Ruff Life and we drifted away so I had to row back; then I picked up Cap and we hitched to town.  Frank took us to the biggest supermarket we'd seen since leaving Florida.  You can tell the boaters immediately:  we're the ones walking the aisles, eyes popping, mouths watering.  Real milk - not the boxed kind!  Never saw a cow in the Bahamas.

"Customs was all of $5.00 for 7 days.  It was a nice, relaxing anchorage.  There were just a few other boats, including the biggest Catamaran I've seen, a tour-type boat, and another stick. We went to Dave's for dinner - Polish sausages, beans, rice.  That proved rough on my stomach for on the 17th I was sick all day (put horseradish on my sausages and tasted that all day).  Dave came and took our computer to look at.  He and Cap went back to Govt House to clear out, then Cap hitched into town for a jerry jug and gas for the dinghy. He got a ride back with a motorcycle, which I would have liked to see."

Dave was a single-hander who was a computer-something back in Denver. He, too, had come down from George Town. Like many others we met, Dave had taken a year off of work to cruise; and unlike Mike he was perfectly capable of handling his tidy ship. An extremely personable guy, he was interested in everything, and was teaching himself Spanish.  We liked him immediately.

"On the 18th we left Provo for Big Ambergris.  An all day ride, but relatively calm.  I kept running away from clouds reflected in the water, which I thought was coral.  We beat Allegra by an hour, anchored, and got buzzed by a DEA (?) plane.  First thing the next morning we got buzzed by a Coast Guard helicopter.  Thought the damned thing was going to land in the water!"

It hovered for what seemed an eternity.

"What should we do?"

"Nothing.  I'm making breakfast."  Cap was definitely cool under pressure, and sure enough, it flew away.


"It was a go/no go until we pulled up anchor at 2PM.  We thought we'd head for Luperon, in the Dominican Republic, weather permitting; if not, then stop at Great Sand Cay.  Dave planned on going there, too, but along the way we all thought it would be OK to head for the D.R. after all, so we did.  It was a bit rough and Cap thought it would calm down, but..."

Up next:  On to Luperon