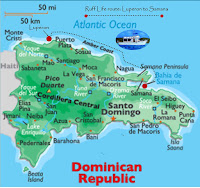 "We still don't know when or if Dave left Luperon. We're exhausted, sitting in Samana after a 22 hour trip. It was good, except for the autopilot acting up, and coming into Samana we saw whales. They were beautiful - just a couple at first, but then whole pods!  Cap was thrilled."

A couple of hours into our second exit from Luperon I began to get nervous, believing the seas were becoming rougher and we were cruising by ourselves.  Cap was driving up top as was his custom, and I was up there, too, hanging on to the woodwork and trying to stay put.

"It's really not bad; look, I'll turn around so you can see."

As soon as he did, Ruff Life puttered along calm as could be, traveling along with the wind.  He proved it wasn't life-threatening so I relaxed a bit as he turned back around towards Samana. This is a perfect example of the advantage of sailing, versus our gas-station-to-gas-station course.  I even managed to stay awake throughout the night, and we played, "I went to the store," endless times in-between snacks.  Czar was fine down below, curled up on his couch. 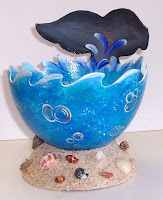 Cap spotted the humpbacks shortly after dawn and was beside himself.  It took me a minute to see what he pointed at but sure enough, there were a bunch of them.  I scrambled across the deck just like we played Crab Soccer in grade school and scurried down the ladder to grab the camera.  I was becoming quite good at that.  Czar was curious about all the excitement, pacing around the back deck while I fiddled with camera settings.  That's when I saw it: 10-15 feet off the back deck, swear to God, a hump slowly emerging without spouting and silently moving along.  Breathtaking. I couldn't move.

"ONE'S RIGHT IN FRONT OF ME," but I couldn't enjoy the once-in-a-lifetime experience because my sister's warning back in New Jersey screamed inside my head, 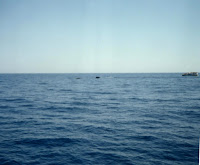 After that my heart was in my throat but it was remarkable; and it was times like these which reminded us that despite all the headaches and risks, our adventure was worthwhile.  After a bit we saw tour boats approaching the pod, then Water Witch came over the radio, a comforting sound.

"The rugged cliffs distinguishing the area appeared at first light, and as we rounded the final points we saw the land covered with palm trees.  Passages South said it was like Bora Bora and I imagine that's true.  There's a couple hotels here, and the town looks quite built-up.  I'm dying to go see."

"Big town compared to Luperon.  More like Imbert, but much prettier.  We've gone in twice now - errands and shopping. Cancelled our boat insurance policy yesterday. Couldn't find dog food, so Cap's going to have to play chef for Czar with cooked chicken and rice 'til Puerto Rico.  Still no sign of Dave."

Samana is where Czar came in handy.  We were all warned not to leave outboard motors on our dinghies, in the water, because they might be swiped during the night. There was a local problem with smugglers of human cargo across the Mona Passage to Puerto Rico and we had a hard-sided dinghy.  If Ruff Life had working davits it would be easy; but we still didn't have our replacement davit fitted with the necessary hardware so the dinghy sat in the water, not to worry.

"That's why we brought Czar along," I was reminded, since Czar barked at anything approaching.  Not that he'd do anything, he was so gentle, but his volume and size were deterrents enough.  Other boats liked anchoring close to Ruff Life for that reason.  For islands I'd been urging Cap to cut Czar's hair since it was so damned hot; but he was proud of his magnificent collie who could part crowds as he walked, handy for us.

"You're not being fair to the dog," I repeated until Cap finally relented in Samana, keeping Czar's mane and tail long.  Over the years Cap's grooming skills improved, and foreverafter he maintained Czar's distinctive lion's trim. Opinions varied whether he was actually cooler but how could he not be, without that mass?  Even so, he continued to live in front of the floor fan inside whenever we could spare the power.

Cancelling the boat insurance was because we were traveling farther south that the coverage allowed.  To reiterate, most insurance policies don't cover vessels between certain longitudes during hurricane season, so boaters were beginning to head either north or south at this point in time.  Hurricane season begins June 1st.  We prayed Ruff Life stayed together long enough to get to a U.S. territory and find jobs.

"Water Witch pulled in an hour or so after us, but still no sign of Dave. Next morning the local contingent came aboard, checking papers - then asking for a tip so we gave them $10.  It was easier than Luperon.

"Others here include Idyllic, Cape Providence, Beyond, Heidi and a huge schooner which is a sailing school.  We want to take a tour, but since we're going to the park for a couple days we'll have to see if they're still here when we get back. Cigarettes are so damned cheap ($1 a pack or less) we're chain-smoking.

"The Commandante suggested we bring the outboard aboard at night.  Haven't, but Cap's locked it to the swim platform and we haven't had a problem. Becoming friends with Vickie and Jeff (WW).  It's nice to have a gal to talk with."

Up next: The Park


Don't miss a chapter! Sign up to be notified of the latest addition on the home page, no obligation, no sharing, no fooling. (Check your SPAM folder for confirmation). Thank you!