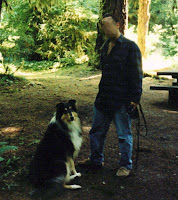 (To preserve his anonymity, I have coined the banal pseudonym 'Cap' for my partner-in-time.)
It had been almost three years since my husband's death; and within the first week of my new job not only did I discover I'd made a mistake, but I fell for the Quality Control manager, a company no-no.  Our meeting was reminiscent of Gone with the Wind except in reverse, for I was the one smitten at the bottom of the staircase while this handsome, dark-haired stud, in blue jeans and cowboy boots, sauntered down, smiled knowingly and accepted my outstretched hand. 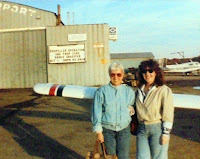 I couldn't help myself.  I was impressed he'd been a pilot in the service, in spite of his fear of heights. I was jealous, too; for despite 19 hours of lessons in a single-engine Cessna, I still couldn't land without bouncing down the runway and had to give it up.  I have Amblyopia, or a 'lazy eye' and my lack of depth perception causes me to bump into things all the time. I can't hit a target, my world looks flat, and sadly, I couldn't gauge how far I was from the ground.  I had the same trouble with skydiving.
The icing on the cake:  Cap had just returned from a hiking expedition to Machu Picchu; not that I'm a hiker, but it demonstrated his adventurous spirit.  His constant companion was Czar, a beautiful tri-color collie.  I love dogs. 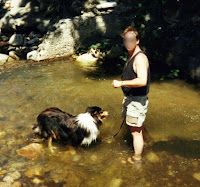 April 4th was our first date to, my choice, a popular Mexican restaurant. I'd only been at the company a week, so in the lobby we were learning some basic details about one another.  I've never been coy about my age and said I was 41; but when I learned Cap was 39 for some reason I felt I was robbing the cradle.  "Only two years" he repeated.
We had a long wait, skipping fruity Margaritas in favor of our hard liquor favorites and plenty of them:  bourbon and Coke for me, and rum and orange juice for Cap.  Suddenly it was time to excuse myself for the ladies' room, and I jumped up just as the Mariachi's approached.

"I can't, I'm so sorry," over my shoulder.  I apologized when I returned, and again after he explained his trouble arranging a private performance; glumly adding the musician's rendition of El Condor Pasa was very good.  I tried not to laugh at the mental image.

"Why didn't you ask them to come back in 5 minutes?"  He didn't answer. 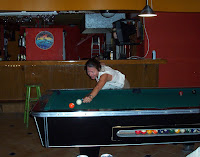 After dinner we headed for Cap's favorite hangout: a tavern with a pool table, and when he impulsively grabbed and kissed me I was a goner.  What a pushover, I know; but  Cap was the kind of guy everyone liked, with his easy manner, polite disposition and wry sense of humor.  Quite honestly, I felt flattered.

Pool was his passion and he usually won. Cap could be cocky, making trick shots while looking elsewhere and good-naturedly goading his opponents.  I tried my best to play the game for his sake, but as explained I rarely hit what I aim for, frustrating us both to no end. "Let's go to the tavern," announced another tortuous night, but I dutifully tagged along like a puppy.
Cap was fairly tight-lipped about his past.  His mother, a devout Baptist, raised three sons alone for the most part.  In addition to our affection for Cap, Betty and I shared something else in common: multiple husbands, and one of hers caused debilitating back pain.  Cap was understandably protective and devoted to her.

Straight out of high school Cap joined the Army and learned to fly helicopters, participating in Desert Shield.  After a few years in the service he flew for oil companies, riding out more than one hurricane on rigs in the Gulf of Mexico. From there he took a job flying scientists around the furthermost reaches of Alaska, and to back up his fascinating stories produced some interesting souvenirs:  ivory carved by Eskimos; a bearskin from a hunting expedition.  To be closer to increasingly frail Betty in central Oregon, Cap became a Life Flight pilot based in southern Washington.

That's where he'd met his ex-wife, playing pool; but unlike me she handled a cue stick well. Cap was devastated by their abrupt breakup and loss of two step-daughters to whom he'd been a devoted Dad for years.  Following his acrimonious divorce Cap lived for a time with his brother in Eugene, but after 2 years of bouncing between unfulfilling jobs he was ready for a real change, and that's when we met.

Cap couldn't, or wouldn't, fly any longer; an apathy I also felt following Tino's death (read backstory here). Utterly convinced the wedding ceremony was the kiss of death for his long-term relationship, Cap vowed never to marry again and was upfront about it from the start.

But once he discovered how wonderful this city-girl could be away from billiard parlors, I knew he'd change his tune. I like being married. 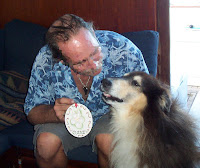 Cap loved dogs, collies in particular, and Czar was the latest in a succession. Recollections of Cap's life were invariably triggered by first identifying which dog he owned at the time; so much so that I grew to know them myself.

Whenever we went out, Cap was on the lookout for someone wanting to punch out his lights. He claimed to have a bulls-eye on his forehead, because he'd been attacked without provocation a number of times.  Cap was cautious yet unafraid and I had no doubt he could handle himself.  I hoped I wouldn't have to see for myself, but for some reason that just made him more appealing.
We were getting acquainted during frequent weekend getaways, where I tried to enjoy the great outdoors in his truck-camper, but definitely preferred the splashy resort packages I sprang for in the mountains and at the coast.
Regardless of where we went, something unfortunate happened: ticketed for speeding along the coast one time; warned not to drink and drive another, no mention of the aroma of marijuana, lucky us; the truck's battery died, leaving us stranded in the boondocks; we even received a verbal warning for riding our rented bicycles off the path.
But I also have pleasant memories, like one romantic evening relaxing in the suite's hot tub on the deck. Cap was wonderful, the perfect date and I was in heaven...until I looked in a mirror to discover mascara  dripping hideously half-way down my cheeks.
"Why didn't you tell me!"  Ah, he loves me...

As I said, I knew almost immediately that I'd made a mistake in accepting my new position.  I'd been a successful buyer and project manager in the stress-filled advertising world of Manhattan; but as a department manager, tackling operating budgets and financial reports?  It was a perfect example of the Peter Principle: People are promoted to their level of incompetence.  It was only a matter of time before they discovered I was a fraud.
During a trip to the Portland races at the end of June, a fortuitous spark was struck while dining at a restaurant along the Willamette River.  A small sailboat pulled alongside the dock, and after tying off a young couple leapt off and sat down at a nearby table.  Cap and I looked at one another.
"Have you ever thought about quitting your job, buying a boat and sailing to the Caribbean?"

Who hasn't?  The next day we wandered around a marina and began to discuss the possibility.  Neither of us knew the first thing about sailing, so it would have to be by motorboat.  Pausing to admire a 50-foot trawler, we were generously invited on board; and by the sound of it the owners and their guests had been enjoying Happy Hour for some time.  They poured us wine, shared anecdotes and offered advice until, with wobbly legs, we managed to climb off without falling into the drink. 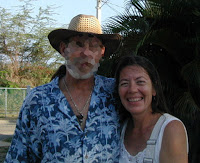 "So, what do you think?"  Cap sounded serious.

"Do you really think we can?"  Two hitches came to mind: our lack of experience and, more importantly, money.

"Sure it's possible.  We can find a fixer-upper for as little as $5,000."
Cap said it so confidently I believed him, or wanted to, and surely we could come up with that.  We ticked off our individual assets, with mine was more than twice his; but this was the escape I craved so I didn't care.
We wandered around Portland showrooms stocked with beautiful, gleaming white yachts to get an idea of floorplans.  Dealers tried to point us in the direction of gasoline powered cabin cruisers, but Cap insisted a diesel-engine trawler was the way to cruise down-island.  I didn't have a clue, so after five minutes of listening to their Greek I wandered around the showroom, leaving all that to Cap.

We soon discovered the price tags for used boats weren't anywhere near our budget.  Sailboats were considerably cheaper than power but out of the question.  We had no desire to spend valuable time learning about jibs and booms when our intention was to enjoy Christmas in the Virgin Islands, plus power boats had to be simpler to operate.  But first we'd have to transport it from the West Coast to Florida; or else cruise south and go through the Panama Canal, which we heard was a grueling trip. 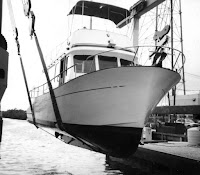 Back in Eugene, Cap scoured local ads, marinas and boating magazines.  Searching was limited in 1997, and our hopes dimmed as his results failed to uncover any used trawlers in halfway decent shape for less than $60,000.  How'd he figure $5,000?  I'd have given up but Cap turned out to be tenacious.
One day he ran into my office waving a grainy advertisement torn from a yachting magazine:  King Tut, a 1971 Tradewinds Trawler, 33-feet and already in Florida, for only $37,000!

Next up: the Auction

Don't miss a chapter!  Sign up to be notified through emails, no obligation, no sharing. (Check your SPAM folder for confirmation). Thank you!

To read from  the beginning:  A Rough Start
Email ThisBlogThis!Share to TwitterShare to FacebookShare to Pinterest