We got hammered.  It was worse than the crossing from Florida and twice as long.  We left the Turks at 10:30 am, with Dave reporting good conditions according to Herb's broadcast on his SSB, so we decided to shoot for Luperon, on the north coast of the Dominican Republic.  Allegra and Ruff Life were the only boats leaving from Ambergris, and since the weather was favorable Dave was going to sail, while we had to go in a straight line. It would be a long cruise but there was no other choice and at first at least, things were just fine.  (Photo note:  Dave took this shot of Ruff Life, dragging the dinghy, as we embarked on this crossing.  It's the only shot I have of the boat in motion, and as you can see the sky looked pretty good.)


"It was another trip from hell.  The seas never let up.  Wind was ok, but the 6-foot seas made for a miserable trip.  We stayed in the cabin (with the red bandanna pinned over the cockpit light), taking shifts, Cap more than me, of course."

I've repeated here and in real life that I'm no boater...I lived on a boat.  My nautical terms and explanations would be considered infant-speak in the cruising community; so if you're looking for a clinical account of how to, you're reading the wrong blog. I write for the armchair-traveler, but still I'm doing my best to be somewhat accurate. I mention this now because, looking at the map, the distance from Big Ambergris to Luperon looks about the same as between the two anchorages in the Turks and Caicos, so why aren't the cruising times similar?  That may be because I'm not using actual coordinates, but also because crossings between bodies of land can be like a boiling pot when the sea is rushing together from different directions.

To continue the story:  We both began the trip up on the fly-bridge, but once the rain began we had to stay below. The auto-pilot refused to work of course, so it really was tiresome to hang on to the wheel, sitting on that little seat with no back and held up by a stick (or as did our predecessor, with a bar stool, r.)  It was the most uncomfortable position but at least it was next to the side door.

Cap needed fresh air and hated driving down below, where he felt nauseous and would turn green.  I was used to traveling in the cabin and always wore my anti-seasickness wrist bands, which had never failed; but this time I felt queasy, too.  During Cap's watch I would lie on the long couch and Czar would cower on his; but when it became impossible not to roll off, he'd hit the floor and I'd hang on to a piece of molding.  I felt guilty as I watched Cap fight with the wheel from behind, but there wasn't much I could do except encourage him to relax, which failed miserably.  Not even, "I went to the store," could distract him.

Nighttime trips were always the worst, when you couldn't see a thing; and it gets dark early in the tropics, contrary to what I'd expected. We first had to close the front window and then the side door, not only against the rain but the SPLASH of the sea, which never let up.  We had to keep the back door mostly closed, too, to keep Czar inside, making it hot as hell.  Ruff Life was rocking from side to side and front to back, over and over.  There are nautical terms for those conditions, but I'll just say it felt like being inside a mixing bowl.

"We got pounded and Cap got pretty sore, while I was just thrown across the cabin like a missile, getting my ear smashed against the window frame.  Nobody told me boating would be so painful!"

It was reminiscent of the refrigerator incident.  I was sitting facing the opposite couch and moved to stand when along came one of those damn rogue waves, broadside.  I went flying across the cabin, one ear making contact with the frame, the side of my face momentarily pressed against the glass.  It was like those funny shots you see in a movie, except from my vantage point it hurt like hell.  I slumped down onto the cushion, shaking my head and trying to focus.

We'd long since lost contact with Dave, but couldn't hear any other boats, either.  We'd heard some radio chatter earlier in the day: boats setting out from different locations and all heading for Luperon, the anchorage recommended Along the Thorny Path (Bruce Van Sant). 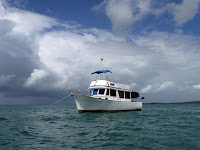 BAM, BAM, Ruff Life's persistent bouncing several feet up and down against oncoming waves was giving me an awful headache.  Cap kept reminding me that we were lucky Ruff Life had a 3-inch thick hull, which only made me fear sinking more; but it was put to the test when one time we went UP but hit something solid on the way down.  Ruff Life was poised at a 45-degree angle for several frightening moments during which we all braced ourselves, before BOOM, back down into the water.

"What the hell was that?"

Cap didn't answer but put Ruff Life in neutral and yanked up one of the floor boards to check the engine compartment.  He was worried the hull had cracked like an egg against a frying pan; and as the ocean continued its rage I held my breath and tried to remember where I put the emergency kit.  Please, God, please...don't make us abandon ship. 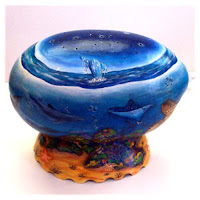 "No water's coming in, I can't believe it.  We hit something."

"What, like a container?"  We'd heard of containers falling off cargo ships and carried by currents, ready for unsuspecting boaters to plow into.

"No, a container would have broken us in two.  Must have been a whale."

Great, but what about the whale?  No time to reflect on that, for Cap returned to the wheel as the cauldron continued.  During our cruise through the Bahamas, he'd told me many times that Hispaniola was a mountainous island and I'd be surprised when I saw it.  I was just hoping for the sun to come up, and when it did,

"We suddenly saw the most beautiful island to date - mountains, trees - looked like paradise!"  At least on the Dominican side.  Unfortunately, Haiti's vegetation has pretty much been stripped out of necessity. 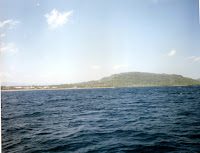 "The motor threatened to quit several times, then it did about 10 miles from Luperon.  Cap had to change the fuel filter, amidst much cursing and sweat."

When Ruff Life's engine did finally quit, we were in sight of the coast and in the middle of a shipping lane.  I stood at the controls, turning the key when instructed and looking out the front windows at a cargo ship bearing down on us, off in the distance but definitely heading our way.  It's getting closer, I repeated while Cap was sucking and spitting out diesel, coughing and gagging, until I uttered my next words:

"I think I'm having a heart attack."

Cap's head popped up from the engine compartment.  "WHAT???"


I repeated the remark, imagining how Tino felt during his heart attack.  I couldn't breathe, my chest was tight and my heart was pounding; but I guess it was just a panic attack because Cap, after checking my vitals, verbally snapped me back to reality and went back to the engine compartment.  I continued my vigil and finally, finally, the motor started again.

In case I haven't mentioned, in our exceedingly poor provisioning re: spare parts, we never seemed to have extra AA batteries for the hand-held GPS.  It invariably gave out just prior to entering anchorages, as it did this time.  However, unlike the Bahamas, you couldn't see one foot below the surface of the filthy water, but fortunately the entrance was an easy in-and-out.  There was one area with some boats anchored, but we continued in to the main anchorage, where it was pretty packed compared to what we'd been experiencing; more like George Town

"Cap had to keep bleeding the lines, but we finally made it into the harbor of Luperon at 10:30 a.m., 20 hours from our kick-off time. We were complimented on our boat by a trawler heading for George Town (obviously they weren't too close), and coming into the harbor was like old home week. We saw names we either knew or heard of: Water Witch, Aussie D'Light and Tim's Aisling, among others.  Went to anchor but were told to pull up to the dock, which was another horror.   Almost hit the boat behind us." 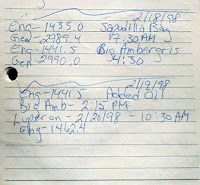 The dock must have been 12-15 feet tall from the water's surface, a crappy looking thing the side of which was concrete from the top to the pilings into the ugly water. While Cap was maneuvering next to it, I was throwing ropes up to whoever I could see standing on the dock and hollering for help to tie off, but I was ignored.

I was standing against the rail on the back deck and Cap was steering up top.  All of a sudden I heard this strange scratching noise and looked along the side.  Czar, who after 20 hours couldn't hold it any longer, had leapt for the top but missed, and all his toenails were scraping down the concrete until he landed in the water.  I was petrified he'd be crushed between the hull and one of the pilings and screamed for Cap to rescue the beast; but as it turned out Czar could swim quite well.  Cap came down, stepped on the swim platform and plucked Czar out by his head and rump.

"Next thing we knew, 6 guys were aboard, Customs they claimed, and we thought they'd never leave.  Kept trying to push diesel on us; went over and over our paperwork, asking where the boat name was.  Finally they got 2 guys who spoke some English - Eddie and Edwin, and after putting them off about the diesel, they left and said immigration would come later, which they didn't.  Off to anchor (again) and barely got it down when the engine quit, but we both just went to bed."

When we woke up later in the afternoon we took a better look around. It was miserably hot and buggy with no breeze in the anchorage, yet no jumping in the water to cool off, either. Because of the bugs we placed an over-sized scrap of screen fabric over the open hatch above the bed, then sat on the back deck to enjoy Happy Hour. 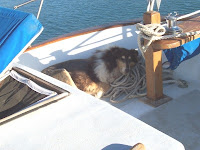 After a bit we heard a strange thud inside; only to discover the large shadowy shape of Czar on top of our bed.  He'd never before seen the open hatch covered with anything, and had tried to walk across the solid-looking screen.  He and the screen sunk through the hatch and onto the bed where he remained frozen, unaware of his surroundings since he'd never been down there before.  After Cap rescued him once more he remained put out and ignored us the rest of the evening.  Thereafter, we only propped the hatch open part of the way.

Up next:  The Cock Fight

Don't miss a chapter!  Sign up to be notified of the latest addition on the home page, no obligation, no sharing, no fooling. (Check your SPAM folder for confirmation). Thank you.