Czar could not be coaxed onto the boat so Cap carried him, just like into the creek. 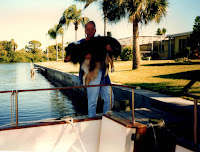 “It's new.  He’ll get used to it.” Czar immediately headed inside the cabin.

Chester arrived shortly thereafter, took one look at our shipping boxes and instructed they be placed on the floor, because they’d likely fall off the sofas. I was securing things inside while Cap and Chester went up to the flybridge, and the next thing I heard was the engine starting.  A Ford Lehman 120hp diesel, the sound was deep and rumbling. Czar began to pace.

I stuck my head out the side door and shouted upwards, “Wouldn’t you rather drive from down here?”

“Noooo….,” they answered in unison. Too hot; too stuffy; can't see as well.


From Wikipedia:  "A flying bridge is an open area on top of a surface ship that provides unobstructed views of the fore, aft, and the sides of a vessel, and that serves as an operating station for the captain or officer of the watch."

Up top there weren't as many instruments and the compass was missing, but Chester knew where we were going.  In the future I'd be reading the charts, which I assumed would be similar to road maps; until Chester unfolded his hieroglyphics, with wavy lines, numbers, chicken-scratches and different shades of blue. “Those are depth markings, bridges and so on.  You’ll pick it up in no time.

"Keep green lights and buoys on the right side when heading to open water and on the left coming back in.  Remember:  Red, Right Returning.  Boats have a red navigation light on the port side; green on the starboard and white lights for power boats."

What?  Good thing we were only going to Palmetto, and it was a beautiful day.  King Tut puttered along at 8-10 knots, a knot equaling a bit over a mile. There weren't any other boats in sight, until a cabin cruiser came barreling towards us.  Cap instinctively steered towards the right. 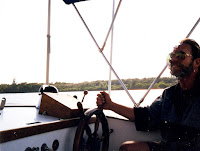 “Take your half out of the middle,” Chester bellowed. As he explained, “It’s like a highway, and we’re entitled to half the width.  Don’t go too far to the side – it’s shallower and we don’t want to run aground.”

Chester inspired confidence, and I found myself relaxing. Cap was having a ball.
"Life is short.  Have dessert first!"

We should all live by Chester's words.  The water was smooth and we rocked very little, so I decided to check things below.  I climbed out of the bench seat and staggered a couple of steps before continuing to the ladder in a crab-soccer position, scooting across the deck on my butt.

"Where's Czar?"  He wasn't in or on either side of the cabin. Oh, God, he fell overboard on our first outing!

"There he is." Cap was leaning over the front and sure enough, Czar had found himself a comfortable spot on top of the forward cabin.

Cap requested a slip at the edge of the marina for an easy in-and-out.  Chester maneuvered into the slip and Cap jumped onto the dock to tie us off while I watched.  Chester quickly explained how to plug into shore power and where to get water; but then he had to run, promising to return soon and check on our progress. 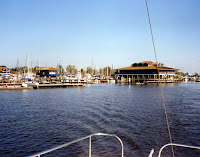 We celebrated with lunch at the marina.  Gazing out at the myriad of boats was like being in a dream and we were part of it, no longer wishful-thinking tourists.

"Can you believe we actually did it?"

"(The Company) is ancient history already.  Do you realize how many people want to do this?"

It was around this time that my journaling began.  From October 20th, Palmetto:

"As promised, Chester showed up a couple of days later.  He showed us how to dock and un-dock, and we filled up with diesel.  Good tip - Dawn blue dish liquid soaks up any spills in the water like magic.  Cap changed the cabin from a V-berth to a double bed.  He's going to build some cabinets with the rest of the space.  We hadn't gotten a decent night's sleep until then." 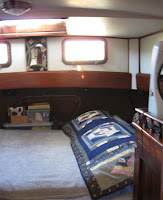 For the time being the bed was a simple affair:  a piece of plywood with a futon on top. Because of the shape of the bow I had to notch and re-sew two corners of the futon, that was a tough job.  But God, it felt like heaven! Instead of rocking side-to-side in the single V-berth (and always feeling I'd roll out) we gently rocked head to toe.
Unfortunately, our night of bliss was rudely interrupted when it began to rain  because the hatch, now directly over the middle of the bed, began leaking like a sieve.

"We had a mess - soaked bedding everywhere.  The next day was to be a Chester Day, but instead of cruising we went shopping.  Got some caulk, fire extinguishers, hand-held GPS and a new 'Y' electric cord. Cap checked the portholes (they need work) but the hatch, as it turned out, was fine--we had accidentally tucked the canvas corners inside when we closed it.  Have to learn!"

That was an understatement.  In addition to Chester, I was being groomed for my role as First Mate by fellow Mates who came to introduce themselves and offer advice.  I marveled at and was intimidated by these women, who could prepare elaborate meals on gimbal stoves, hand launder sheets, and maintain detailed inventories of their impeccably organized cupboards, which they proudly showed off. 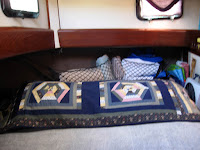 From one woman I heard the suggestion of using a futon rather than a standard mattress, because the corners of the futon could be trimmed to fit the shape of the V-berth.  It would also be cheaper than buying really thick foam. Cap slept nearest the door because the inside made him claustrophobic.  Half of my side was the alcove, for lack of a better word, underneath the deck. If the weather was nice it was great, with a breeze hitting us through the hatch; but if it rained and everything had to be shut, then I felt claustrophobic, too, and would climb over Cap and up to the living room for air.

Czar liked to sleep outside and was comfortable getting around the decks and dock.  He began jumping off the boat during the night and people would return him, so we had a frustrating time using bumpers to keep the boat away from the dock.

Chester usually showed up unannounced; once while I was looking for a place to hang the only wind chime I brought along:  a triangular New England Buoy Bell.

"Then why are you looking so strange?"

I hadn't thought of that and my disappointment must have showed; for on his next visit Chester presented me with a shiny ship's bell, which Cap mounted to the ladder outside.

Chester took us to marine stores and supervised our purchases; and each time we returned with hundreds of dollars of stuff.  We were running out of dry storage space (since the basement/lazarette was always damp), so we bought a small dock box, which Cap wanted for the flybridge but Chester discouraged that idea.  It only fit in one spot on the back deck, but at least Cap's toolbox finally got stowed; along with Czar's food container: an over-sized holiday popcorn tin.

There was no built-in seating on the back deck, and although the space was large it was cut up by doorways, walkways, the ladder and now the dock box, so we picked up a couple of white plastic stacking chairs.

While Cap followed Chester around marine store Boat US, I meandered like I do in hardware stores, picking up fascinating items without understanding their purpose.  I was perusing their book selection when a salesman asked if I needed help, so I explained I didn't know the first thing about boats and wasn't there some sort of Boating for Dummies?  He pointed to the most important item I would buy:

"Good Boatkeeping, by Zora and David Akin.  It's been my Bible.  A couple wrote it with people like us (particularly me) in mind.  It's perfect - tips for keeping pets aboard; storage ideas; maintaining all parts of the boat; even first aid for jellyfish stings.  Many of Chester's suggestions have been reiterated in the book, so it's nice to have confirmation.  Chester is a godsend.  I'm never embarrassed to ask 'dumb' questions, and he's never grudgingly offered info.

"Don't know what I was thinking when I packed.  I brought too many pots and pans, clothes and towels, but maybe not. I should have loaded up with Tupperware.  We need more square things for space-saving, and I never thought about my tins rusting."

Drawers, cabinets and our one closet all extended to the hull, and the place had been closed up for some time. I was assaulted by dank odors as I peeked into dark cubbies, and vowed to clean out every single space so as not to be afraid of reaching into any area.

Next up:  Nothing as it Seems

Don't miss a thing!  Sign up to be notified of new chapters, no obligation, no sharing.  Check your Spam folder for confirmation.  Thank you!