“You have to be a little bit crazy,” was my answer to the nice woman at the auction, who asked how I had the nerve to quit my job, sell all my stuff, buy a boat and head for the Caribbean.

“That would make a great title for a book.  Is your husband an experienced boater?”  I sheepishly admitted we'd only just met, and that neither of us had any practical experience.

"Make sure you take lots of pictures, and keep detailed notes."  Thanks in large part to her sage advice, you're able to enjoy this now.

After the harsh reality of boat prices, $37,000 for a beauty such as King Tut was not to be believed.  Built in 1971, Hull No. 001 sounded reassuring to Cap, but I kept remembering Dad’s advice to “buy a Wednesday-car”.

The boat was docked in Florida but the owner was dying of cancer in Denver.  Cap contacted Dan, who mailed color photos of the boat and included an official-looking Survey:  a report of the boat's condition top to bottom, conducted by an independent professional.  It indicated King Tut was in stellar condition, (see all the specs here); but considering we were in Oregon I posed the obvious:
"Don't you think one of us should fly down and check it out first?"

"No need, the Survey's great; and it's the best we can afford. Let's not push our luck."

Well, that would save some money. In addition to a color photo of King Tut in dry dock, Dan sent two interior photos, which you see here.  I couldn't figure out what I was looking at and wasn't crazy about the dark wood, but I visualized how I'd replace the dated pink and brown tweeds and make it homey. 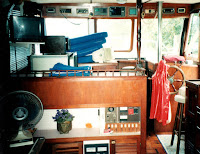 Cap and I would gaze at the photos and consider where we might go; what we might do; how we might not only survive but thrive. We were resourceful; fearless, for the most part; and felt we had nothing to lose by trying.  I knew little and cared less about boats except as a means to escape the depression and loneliness of the past years; so based on a few photos and faith in a document, we decided:  we wanted King Tut.


Unfortunately, the 1971 boat was too old to qualify for a bank loan so we re-examined our financials:  I had a car, furnishings, some savings, an IRA and a wallet full of credit cards. Cap had paid cash for everything, including his properties; therefore credit wasn't established. He owned three vehicles, some furnishings, automotive and woodworking tools, and a verbal promise for $10,000 from his ex-wife, in exchange for keeping their house. 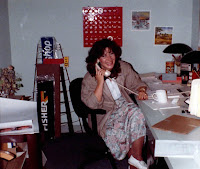 I tried negotiating the price down, but Dan wasn’t budging.  He was short of time and there were other interested parties.  Whether or not that was bullshit, after the disappointing search for anything close to our budget I was afraid to lose this opportunity; and possibly my new partner with it.  SOLD.

I withdrew the entire amount from my IRA and wired the money to Dan in early August. I didn't bother with technicalities like taxes, for it was my money, used to purchase my first home.  I'd argue that rationale with the IRS when the time came.  Besides, I was leaving the country so they’d have to find me first.

“Whose name do you want on the title?”  Dan asked, and I immediately dictated both. It was proof of my commitment to us; plus it might help protect the boat from tax collectors.  I still had the remainder of my IRA for a cushion, so my savings account became the Cruising Kitty.

We expected to try boating for a year to see if we liked it, without ever discussing what we'd do if we didn't. $20,000 would surely be enough to keep us afloat, and Cap said he could pick up work as a carpenter.

"What will I do?"  Paint, he dreamily suggested, and Gauguin popped into mind. We still had the vehicles to sell, and planned on a formal auction for the things we could live without.  In our bones we knew that neither of us could accomplish this feat alone and it became our strongest bond; which had to continue if we wanted this trip, and we did, very much.

Actual boating experience was incidental to our scheme.  Cap had owned a party-boat on the Columbia River in Washington, and he was a certified Marine Engineer (thanks to military correspondence courses).  A trawler would be easy to learn to drive, and Cap was confident he'd be able to handle most repairs; plus as a former chopper pilot he was comfortable with navigation.  We'd be island-hopping after all, not crossing an ocean; at least once we got to the Bahamas.

My own experience was occasional family excursions along the 'Jersey Shore on my brother-in-law's racing boat, Volk's Wagon.  I always got seasick, but I'd go anyway. Dad loved it. My parents didn't take us camping but rather to museums, plays, historical sights and the beach. Roughing-it meant using paper napkins, but Cap's upbringing in the mountains of California and Oregon taught him useful survival skills.  We'd be fine.

I dreamed of heading for ports unknown, wind through my hair, alongside a loving mate.  Cap, a true thrill-seeker, was relishing his upcoming role as Captain of his yacht.  Our imaginations had taken hold, and nothing was going to stop us.

Everything was dependent on a boat we hadn't seen, and as the reality sank in I began having second thoughts. I needed reassurance that I hadn't been played for a fool, so during a smoke break I gingerly voiced my apprehension about leaving together (without any real commitment remaining unspoken).

"Either of us can bail at any time," Cap said easily, leaning against a tree, field-stripping his cigarette.

I almost swallowed my own but my heart blocked my throat as I tried to form words.  "Bail at any time?  What are you saying?"

My chest tightened and I wondered if Tino felt the same just before his heart attack. I returned to my desk like a zombie, and avoided Cap the rest of the afternoon.  How could I be so stupid and trusting?  What have I gotten myself into?

That evening, following, "What's wrong?" for the umpteenth time, I finally admitted my fear: abandoned on some island with a boat I couldn't possibly handle by myself.  Cap laughed and explained he meant we could bail from our jobs at any time, rather than work 6 more weeks as planned. I didn't find it as funny, but despite my doubts I gave notice I'd be leaving the end of September.

I didn’t have a clue as to how much to bring, or what.  Dan said the boat had plenty of storage space, much more than other boats, but how much was that? The photos didn’t show the kitchen, bathroom or bedroom.

“Whatever…how much can I take?”

He pointed towards three plank shelves above the washer and dryer, six inches deep by eight feet wide.


“You must be joking!”  He wasn’t, so I designated three areas and began sorting: boat-stuff on the shelves; cherished mementos destined for storage into the garage; and sell everything else. We paid six months up front on the smallest storage unit we could find, and I would take Tino's ashes and a few other special things back to Mom's in New Jersey. After divorces and frequent moves neither of us had much, and what remained was most dear; but there was no choice other than ruthlessness.


After Tino died I'd cry in the dark, offering everything if I could have him back for just another day. I sold and gave away many of my possessions back then because I hoped I'd depart shortly after my love. My priorities had become the polar opposite from what they were, which is why it was easier to get rid of my stuff now for a mere boat.
My Wedgewood and Waterford were sold to Replacements, Ltd; hardbacks to used book stores; old vinyl to record shops. I sold winter coats, suits and designer handbags for a fraction of their cost.  Cap had his own tough decisions over tools and gear.

"Cowboy boots on a boat?"

"A work pair and one other, but I can't decide which."  He owned around ten mostly exotic pairs, including python, ostrich, white snake, rattlesnake, alligator; all broken in.  Despite my teasing I could understand his angst, for I was having the same dilemma with my high heels.

I didn’t care how boat interiors were supposed to look. King Tut was the first home I owned and I wanted it to be homey. Items on the pine shelves included an espresso machine, decorative tins, a watercolor of Anasazi cliff dwellings, thick Fieldcrest towels.  To keep up appearances: makeup, electric curlers and dry-clean only evening wear.

Most everything else, including stereos, TV's, VCR's, paintings, figurines, quilts, tools, Regulator clocks, were to be sold through the gavel. It was strangely exhilarating to shed material possessions.  Something Zen about it; definitely freeing.

I found an auctioneer through the Yellow Pages, who assured us that he should be able to get a good price for everything.
“But you can’t tell for sure.  Is there anything with a Reserve…the lowest bid you'll accept?"

I felt like a fool for not knowing even the basics of something so important to my pocketbook.  I spied the jelly cupboard I'd painstakingly painted after Tino died.  Took months to finish. 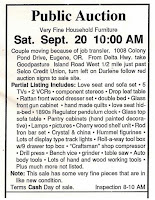 We were running out of time. The auction date was set for 2 weeks, to allow time for advertising.  Cap put For Sale signs on his truck and camper, but was still undecided whether to part with his sports car.  We would drive my Honda to Florida pulling a small U-Haul with our stuff; and then place Trigger in storage until our return.


The day of the auction arrived.  The crowd was small, and most seemed pretty chummy with the auctioneer.

“The newspaper messed up and didn’t print the announcement the first week,” the auctioneer claimed; but they did have a small piece in the paper the day before.  He began in the living room.  Encouraged not to watch, I waited in the kitchen as beautiful items received low bids.  I couldn't stand to listen anymore so I moved outside. 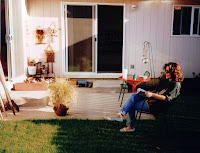 At first I was fine, joking with the woman in the beginning of this story, who was (carefully) jumping for joy over her armload of Hummels.  But after watching decades of travels, marriages and impulse-shopping carted away, never to be seen again, I began to crack.

Cap, sensing my panic, gently led me away to Marie Callendar’s restaurant for a liquid lunch.  He described our lives in the not-too-distant-future and how relaxing it all promised to be.  In my mind I looked great in a bikini.  It’s not a mistake, Cap reassured; we’re about to embark on a remarkable journey.  Keep your eye on the prize…

"I know; you’re right.  I’ll remember those words, no matter how much we get."  With that, we returned to the auction.

For everything, except the jelly cupboard.

Steady, old girl.  Cap was a rock, though he was gnashing his teeth over the low bids on his tools.  He’d already sold the truck but not the camper. There was no choice now: his Fiat had to go.

Within 6 months of our first date, we were just about ready to leave.

Next up:  Florida Bound

Don't miss a chapter!  Sign up to be notified through email, no obligation, no sharing. Thank you!