"We had dinner on Dave's Allegra with Aussie D'Light and Destiny Calls.  Vickie and Jeff from Water Witch stopped by to say hello, and Don kept teasing us about what Tomboy told us in Georgetown:

"No trawlers have gotten through going south..." 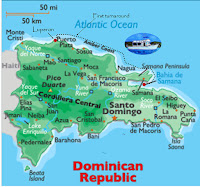 Our next stretch would be cruising along the north coast of the Dominican Republic from Luperon to Samana, which had a good sized harbor with provisioning, and was the jumping off point for Puerto Rico.  We planned on heading out with Dave but he was delayed, so at 6pm on the 1st we took off with Water Witch, a sailboat hailing from Texas.  Cruising at night is typically calmer, since the trade winds don't pick up until around 8-9am.

"We were out about an hour and the engine started acting up.  Cap had gotten all the air out of the lines, so he couldn't imagine what was going wrong.  The engine kept starting but would quit.  Cap was down 'sucking diesel,' etc., while Water Witch circled." 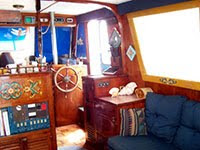 Standing at the wheel to start the motor when instructed, I peered out the side door through the darkening sky at the rocky coastline creeping closer.  Czar was stuck on a couch with the floor opened up to the engine compartment, and Ruff Life wallowed while Cap worked.  However, it was extremely comforting to know there was someone else out there who could rescue us if we foundered.


"Water Witch circled Ruff Life over and over, following the seaman's creed not to leave a stranded vessel.  They offered to tow us, but because of wind direction it would have to be back to Luperon.  Well, the engine finally quit for good.  We had to throw a line to them because they said "no" at our offer to dinghy it over - and here they came, across our bow.  We were horrified - looked like we would hit and Cap couldn't see them because of the swells. They looked inches away."

The sea was getting rougher.  Cap scrambled up to the fly-bridge to get a better look and try to keep Ruff Life steady.  I made my way to the bow and tied a rope to the Samson Post, then positioned myself to toss it to Water Witch as she crossed our bow (no lifelines).  I couldn't see a thing.

Missed by a nautical mile.

I pulled the rope back in; looping it over my arm while steadying myself.  The hull was sloped and it was awkward to stand.  Jeff circled Water Witch again, its white shape appearing intermittently between the waves, and again I missed.

"I CAN'T DO THIS," I screamed through the night, but I sure as hell couldn't steer the boat and the only other soul on board was cowering inside. 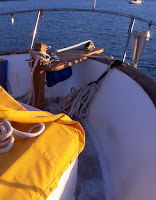 So I prayed and, thanks to George Lucas and MAD magazine, reminded myself, "Feel the force, Puke."  As Water Witch appeared from the left I propped my foot against the side and let go of the railing, my throwing arm at the ready.  Ruff Life bounced but I calmed my thoughts until I heard,

The white line unfurled across the water for what seemed like ages until Vickie's Texas voice rang sing-song across the waves,

The sea was easier returning to Luperon because of the wind direction, and Jeff brought us safely back without any complaint about upsetting their plans.

"Couldn't imagine what would have happened if they hadn't been there.  Cap had to help us into the channel via the dinghy because it was difficult to see the markers.  WW cut us loose, we dropped the anchor, and Cap went to Dave's in case he was planning on following us.  It was midnight - 6 hours later and back where we started.

"Next morning I woke to voices, stuck my head out of the hatch and there was Water Witch, heading out at 7am.  Aussie D'Light gave us their fuel hosing to use and down Cap went into the engine compartment, ...back into the water with the leeches... (the African Queen).  There was a clog in the fuel line that looked like steel wool; he cleared it and in relatively short order all was fixed.  We got out by 3pm after Cap got dinghy gas.  Eddie was shocked to see him, but once again helped by getting a car for the trip to the station and loaning Cap 20 pesos.

"We left - again.  I dashed below to check on the motor when we were at the same position as where it quit the night before. Everything was fine, but just at that moment Destiny Calls called so I asked about Dave; who broke in to say he'd try to leave shortly (clearance papers only good for 24 hours).  He didn't like the diesel he got from Eddie and wanted more.

"I don't know what you know about how diesel looks."

"Only what I've seen come out of Cap's mouth."

"Switch to another channel,"  someone broke in.

Up next:   Whale Watching